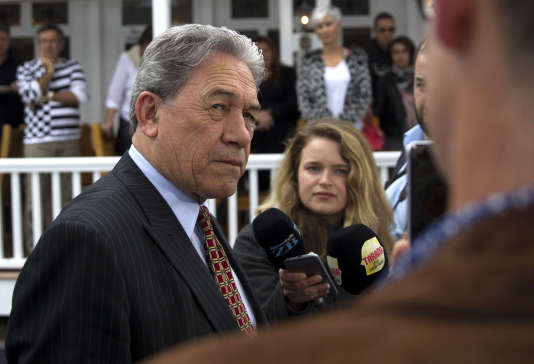 Who will choose Winston Peters? After the parliamentary elections on Saturday, September 23, the leader of New Zealand first (NZF), populist party and anti-immigration, has recovered its title of “maker of king” . For the third time in twenty-one years, the elected Maori is in a position to appoint the next chief executive of New Zealand.

Neither the Conservatives of outgoing Prime Minister Bill English nor the Labor Party led by Jacinda Ardern got 61 seats, the absolute majority in the unicameral Parliament. By partnering with one of the two courses, Winston Peters, head of a group of nine members, can do tip the balance one way or the other. On election night, the 72-year-old man did not close any doors. He intends to play the competition to get the maximum gains for him and his party.

“We will make a decision based on the interests of all New Zealand and NZF. (…) It will take time, “ he said. In 1996, he had bargained for almost two months before accepting the best offer – that of the Center- right National Party that had agreed to appoint him Deputy Prime Minister and Minister of the Treasury. In 2005, it was by offering him the prestigious portfolio of foreign affairs that the Labor Party, Helen Clark, reached an agreement.

At the opening of these new talks, Bill English’s National Party, which came out on top with 58 MPs, is in a strong position. “Nearly half of New Zealanders voted national,” said the Conservative leader. Following a hard-fought campaign, this practicing Catholic, a former farmer, austere finance minister for eight years, before being appointed prime minister in December 2016, managed to convince46% of voters to vote for continuity.

After three Conservative mandates, not only has New Zealand emerged from the recession, but it has an enviable fiscal surplus and is posting steady growth. Nevertheless, the country is in the throes of an unprecedented real estate crisis and inequalities remain strong. If the National Party was not sanctioned by the voters, it is not the same for the formations that accompanied it in power for nine years. The Maori Party, in particular, loses its two deputies. “The New Zealanders want another coalition,” said Bill English, who intends to open in the coming days, ”  positive discussions “ with NZF.

These discussions are especially muscular. In the opposition for nearly a decade, Winston Peters has been constantly criticizing the Conservatives. His training , which advocates “law and order” , very popular with seniors, criticizes in particular the “Wellington bureaucrats” to neglect the deep country. It also calls for a drastic reduction in the number of immigrants admitted each year to New Zealand – from more than 70,000 currently to 10,000.

The departmental elections (ex-cantonal) designate the members of the county council (ex-general) within the framework of the canton.

The mode of election of departmental councilors (former general councilors) is also modified.

The new voting system was applied for the first time during the departmental elections of March 2015: two departmental councilors were elected in each canton in the two-round binominal election . The candidates came in pairs consisting of a woman and a man . This provision aims to pursue the goal of parity that had begun to be implemented since the law of 31 January 2007, providing that the substitutes must be of the opposite sex to that of the candidate.

In addition, to ensure parity, the law provides that the pair of alternates of candidates must also be composed of two persons of different sexes, so that each candidate and his replacement are of the same sex.

The pairs of candidates of different sexes must file a joint declaration of candidacy before each ballot.

Elected for six years , the departmental councilors are now renewed in full . It should be noted that Paris, both municipality and department, does not know any departmental elections, the Council of Paris being elected according to the municipal ballot.

In the second round, the pairs who obtained at least 12.5% ​​of the votes of the registered voters (Article L210, paragraph 8) are allowed to run. However, since this second condition is severe, in particular because of the often high abstention , the electoral code allows the pair who has received the most votes, after the pair fulfilling the conditions, to maintain themselves, or both if none fulfills the conditions, as was already the case previously with the single-member ballot. In the second round, the relative majority (the largest number of votes) is enough to be elected.

The provisions concerning the replacement of departmental councilors who died or resigned , following the partial censorship by the Constitutional Council of the law of 17 May 2013, were adopted by the legislator in the law of 16 January 2015 on the delimitation of the regions. . The censored provisions could lead to vacant too many seats of departmental councilors and for too long a duration, which was considered contrary to the principle of free administration of local authorities.

This new voting system came into force during the March 2015 local elections and mechanically led to a massive influx of women into the county councils.